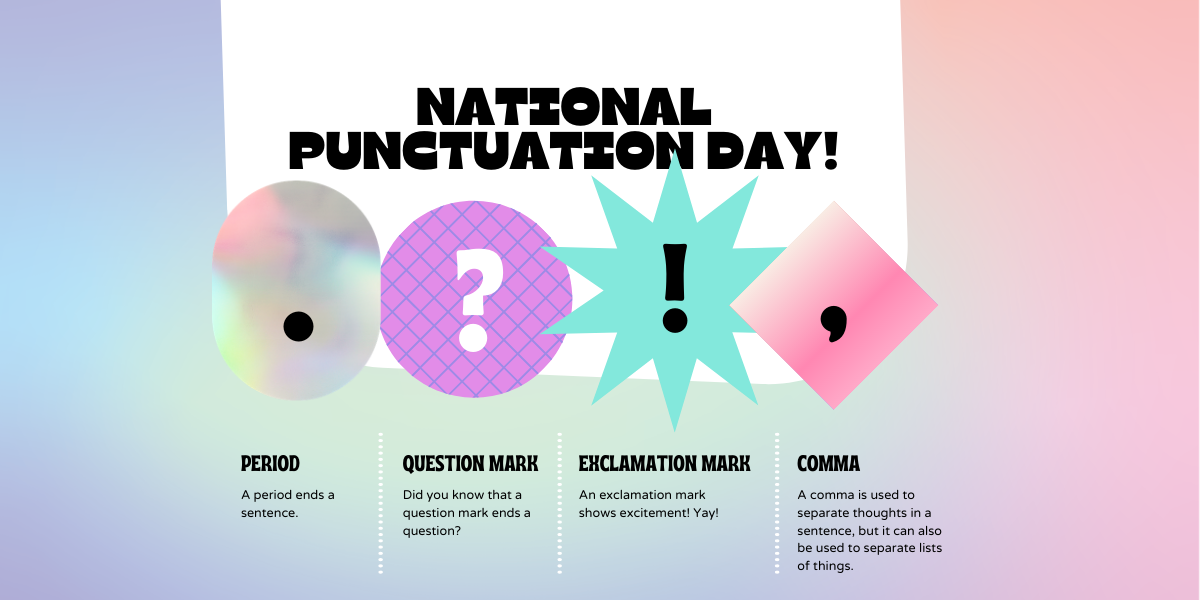 Are you looking for validation to celebrate your love of a properly placed apostrophe? Look no further. National Punctuation Day is celebrated annually on September 24. The “holiday” (quotation marks used intentionally) was founded by Jeff Rubin, and is featured in Chase’s Calendar of Events. Even if you aren’t enamored with punctuation, we all have to use it to communicate clearly when writing, so learning to wield punctuation powerfully is an important skill.

What’s the Point of Punctuation?

Do your friends and acquaintances get annoyed when you point out their punctuation errors? Are you the first to spot typographical errors in signs, menus, and programs? Or does the word “ellipse” make you think of a sun-related natural phenomenon instead of punctuation?

Whether punctuation leaves you befuddled or you’re the one pointing out all the misplaced commas in society, you’re in good company. Proper use of punctuation is a common struggle for all of us who communicate through the written word, including text messages, emails, essays, signage, and notes. Most forms of electronic communication offer a spelling and grammar check tool, but they aren’t always used, and they are rarely perfect. Knowing the most prominent types of punctuation and how to avoid common errors is the first step to using correct punctuation to communicate coherently.

To signal the end of a sentence, you can choose the appropriate punctuation based on the type of sentence. Most people understand the basic function of these marks, but for a statement, use a period. Do you know which mark to choose for a question? A question mark will suffice. And to convey excitement or emphasis, use an exclamation point!

To create a contraction or show possession, use an apostrophe. The pitfalls of apostrophe usage are rampant, as are examples of its misuse. Here are a few quick tricks and tips to place your apostrophes correctly.

To use an apostrophe correctly in a contraction, write out the full phrase you plan to contract (or think through the full form of all words) before you replace the missing letters with an apostrophe. For example, “it is” becomes “it’s,” whereas if you are describing attributes of an object, you refer to “its” characteristics. You shouldn’t add an apostrophe if you aren’t removing any letters when creating a compound word like “goodnight,” but if you’re mumbling or shortening the phrase to “G’night,” an apostrophe is appropriate.

To show possession, you can rephrase the possessive statement to help determine where to place the apostrophe. Whose (not who’s) pen are you holding? The pen belongs to Sarah, so it’s (note the use of apostrophe as a contraction, not a possessive) Sarah’s pen.

Apostrophes are not needed to make a word plural. When writing your holiday cards this year, please do not wish everyone the joy of the season from “The So-and-So’s.” Your family’s last name should not need an apostrophe to make it plural, unless you happen to be “The Jones’s” or another name that ends in “s,” in which case, I recommend using “The Jones Family” as it eliminates all confusion.

Comma placement is debated in grammar circles. The notorious Oxford (or, penultimate) comma is especially contentious, but I recommend you use it. Some other common sentence structures where a comma is needed include:

This is not an exhaustive list, but equally important is the skill of not overusing commas. Otherwise, your sentences, will be belabored, by excessive, some may even say, exhaustive, altogether too many, pauses.

For short sentences that need to be further explained or to introduce a list, you can add a colon. The text immediately following a colon completes the thought that the text before the colon introduces. For example:

Q: How many colons can I possibly add to this example?

A: More than expected. Expectations are high: I must use more colons for emphasis.

Semicolons function in a similar way; they delineate sentence breaks, and they can be used to combine two similar clauses into a single sentence. I use semicolons to add variety to my writing. When writing, a mix of semicolons, shorter sentences, and longer sentences with dependent phrases can help your writing seem more polished. Use semicolons intentionally; use them well.

Parentheses are another optional punctation mark to signal that information is being added to explain or as an aside. Parenthetical statements should be used sparingly (and with finesse) to not interrupt the flow of the narrative. Parentheses are also used to cite a source if your text is being quoted. (Occasionally, you may add a full statement in parentheses, but this is uncommon.)

Brackets are typically found within a quote if commentary or corrections are required. Changing a direct quote is verboten, so using brackets is a good way to signal that any errors are original to the source [sic]. You can also use brackets within parentheses, so if you have a statement that requires a parenthetical within a parenthetical, try to rewrite it, and then use brackets if needed.

The original source material requires us to use lots of acronyms (by the way [BTW] this happens a lot in real life [IRL]).

Hyphenated words and phrases can be used to modify a noun (or be used as adjectives) when placed before the noun. For example, if the pages of your dictionary are well worn from extensive use, you may have a well-worn book. Do not hyphenate adverbs that end in “–ly” or a modifier that includes the word “very.” Don’t get a know-it-all attitude in respect to hyphens because they can also be used to avoid ambiguity, so sometimes the hyphenated modifier will be retained after a “to be” verb. For example, the writer of this blog post is well-known (as far as you know).

Another punctuation mark to indicate an emphatic pause or to set apart certain text is the dash. In our documents, we typically use an em dash — differently than an en dash – , and we do not use dashes interchangeably with hyphens. For most basic compositions, you can use a dash to set apart items in a sentence—perhaps an unexpected phrase or list—without creating a new sentence.

When you need to omit words from the middle of a quoted sentence…or add a longer pause than a comma, you can add an ellipsis. If an ellipsis is placed at the end of a sentence, there will be four dots, rather than three. Use sparingly….

Visit https://www.nationalpunctuationday.com/ for more fun ideas about how to celebrate National Punctuation Day and hilarious examples of punctuation errors. While punctuation is often misapplied and pet peeves abound, you can use punctuation to communicate better in writing. Using the right punctuation enhances understanding of your carefully chosen words by adding the pauses and signals readers need to aid comprehension.

If you need help getting your punctuation right for any and all business correspondence and documentation, contact us today. Our technical writers and editors are happy to help you create flawless documents so that you know your intent is communicated clearly.